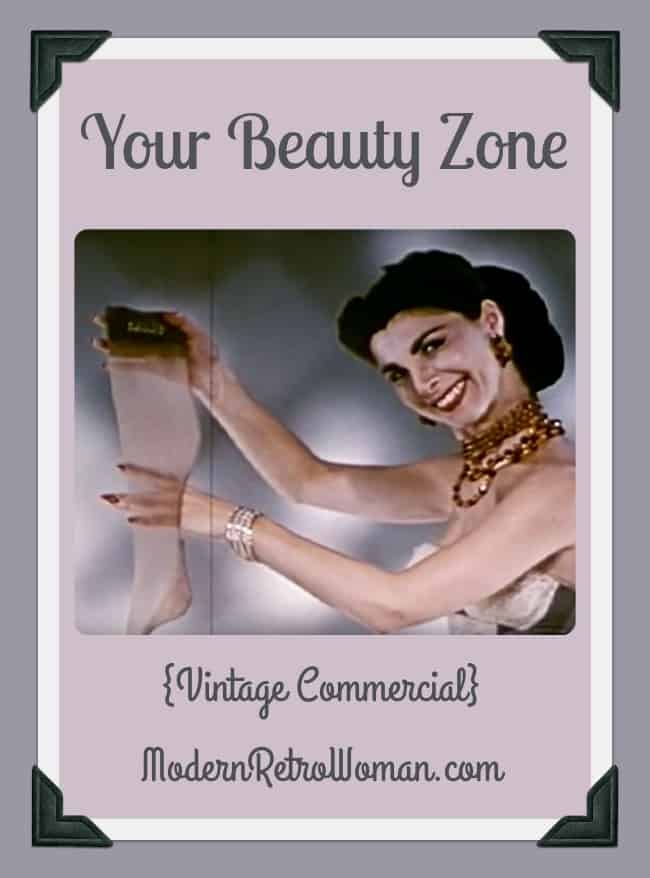 For your enjoyment, I offer The Story of a Star, a short film from 1956 showcasing Algilon nylon stockings (developed by those crazy chemists at Deering Milliken).  The film, I’m guessing, is geared toward department stores to entice them to carry the Algilon brand.

As the film opens, we are reminded that things change and improve over time.  When flappers were all the rage, silk stockings were being worn.  But, not by the women in 1956!  Nosirree!!  They are wearing nylon stockings. Because they are better!

We then get a little science lesson on how nylon is twisted so that it stretches.  But the Deering Milliken scientists came up with a special process…that the film doesn’t show to us.  Because it is a secret process.

And then the fun begins.  The beautiful model stretches the nylon stocking, not just one way, but, two ways!  She then puts one of the stockings on and demonstrates how the nylon moves instead of breaking.

So, in the sales pitch to the retailers, they are promised that women will practically stampede in their effort to get the new nylons!  Why?  Because a television commercial will be shown over and over again.  We are then treated to said television commercial.  Seriously, the film is worth watching just for the campy nature of the embedded commercial.

As the film winds down, retailers are told to tell their customers that the stockings are like fine perfume and they need to be worn to be appreciated.  They also remind them to discuss The Beauty Zone and the Comfort Zone.  If the retailers do this, they will have happy customers.

Alas, the lovely models and the narrator don’t know that Algilon nylon will be obsolete just eight years after this film was made.  DuPont made an even better nylon in 1964 and that was that.

Story of a Star

Click here if the player does not work for you 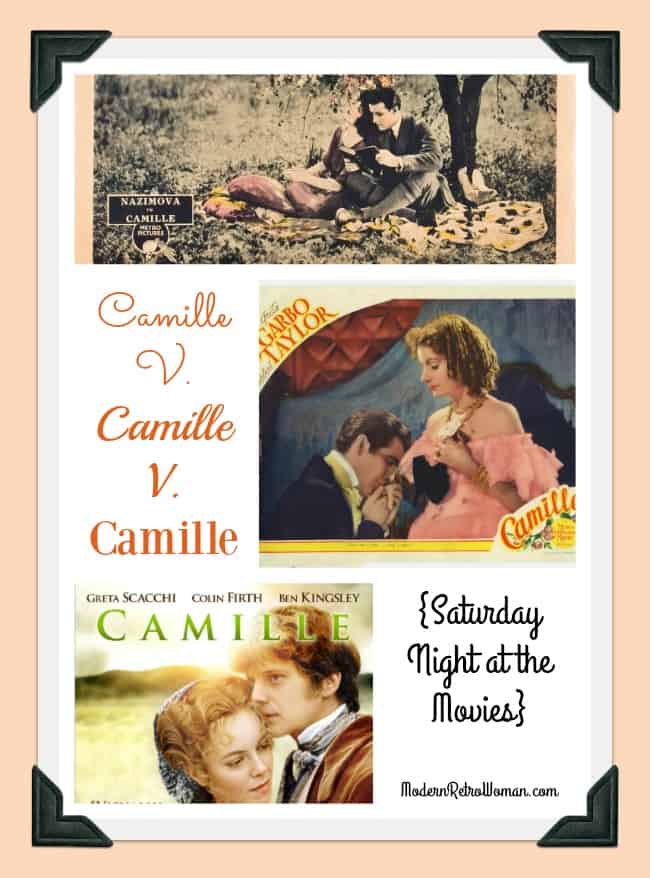 During a recent bout with pneumonia, I decided to rewatch Camille, starring Greta Garbo, about a 19th century courtesan living the high life despite battling consumption (known in modern times as tuberculosis).  But it turns out that there are also other film versions of Camille: The Lady of the Camellias by Alexandre Dumas, fils.  Since I had a lot of recovery time on my hands, I decided to watch  three versions made in 1921, 1936, and 1984.

The first film interpretation appears to be a 1921 silent film starring Alla Nazimova as Marguerite and Rudolph Valentino as Armand. I discovered it because it was included as a special feature in the DVD for the 1936 version.

Although she is no longer a household name, Ms. Nazimova was quite famous in her time for both her acting skills and her private lifestyle.  As her film career waned, she converted her Sunset Boulevard estate into the infamous Garden of Alla bungalows to avoid bankruptcy (New owners added the “h” to the name by the 1930s).

Rudolph Valentino was just hitting his stride when the film was released.  When filming began, he was still an unknown. But the release of The Four Horsemen of the Apocalypse, while Camille was being filmed, catapulted him into the fame that still lives on almost 100 years later.

In the 1921 adaptation of Camille, the story takes place in “modern” post-World War I Paris. Marguerite and her friends were carefree party animals, spending all of their time in clubs where they drank and danced.  The parties then moved to Marguerite’s apartment for more drinking and dancing and gluttonous meals.

Aside from the great set design by Natacha Rambova (where she met Valentino and later became his second wife), this adaptation of the story is a bit disappointing.  The visuals are beautiful but the modern interpretation fails to capture the essence of the story.

My take: Watch it for the amazing Art Deco set design (reviewed on the Fashion, Film, and Frivolity blog) and don’t worry about the bland story.

The 1936 interpretation of Camille starred a luminous Greta Garbo and Robert Taylor.

This adaptation of the story is included in several top films of all time lists and includes a veritable “who’s who” of MGM stars.  In addition to Ms. Garbo and Mr. Taylor, Lionel Barrymore, Henry Daniell,  and Laura Hope Crews (Aunt Pittypat in Gone with the Wind).

There is a reason this film is considered a classic.  It is lush and beautiful.  The magnetism between Ms. Garbo and Mr. Taylor is palpable.  Mr. Daniell’s portrayal of the baron is rendered perfectly icey–he “owns” Marguerite and expects her deliver her, ahem, charms.

My take: Ms. Garbo makes dying of tuberculosis seem like the ultimate in romantic sacrifice.  Have the tissue box handy because you’ll need it.

This version gives a back story of her running away from an abusive father who was a pig farmer.  The baron, instead of being her lover, is a father figure who takes her in to his home after his daughter dies.  He hires the best tutors to teach her how to be a lady but she rebels and is determined to be a courtesan.

My take: I decided to watch this version because, you know, Colin Firth in period costume.  But the script is horrible, there is no chemistry between Mr. Firth and Ms. Scacchi (I mean, seriously?  We are talking Colin Firth, here! How can Ms. Scacchi be so wooden!), and even period costuming worn by Mr. Firth couldn’t save it.  Rewatch Pride and Prejudice instead for your Colin Firth fix (we won’t tell that you’ve already watched 100 times…we understand the need).

TB is Not Romantic

As I mentioned before, I had this image of consumption based on Greta Garbo’s romantic portrayal of Camille.  After spending a couple of weeks violently coughing due to pneumonia (and I had the benefit of modern medicine!), I can tell you that there is absolutely nothing romantic about dying of consumption…even with Robert Taylor at your bedside.

Have you seen any of these adaptations of Camille?  What did you think?

The first Independence Day parade I remember attending was in Acton, California, when I was a teenager.  Although it was only a short drive away, it might as well have been another world.  The residents of this small town were still very much cowboys.  I believe there was a rodeo involved, but I don’t remember exactly.  But I do know that it was well over 100ºF. and we were all getting sunburned and sick from the heat.  I recall thinking that I was hoping for a small-town parade like I’d seen on television but instead we got dry, windblown, dust.  Us pampered suburban folks couldn’t stand the heat like those cowboys could!

The next July 4th parade I attended was some 25 years later when The Mister and I lived in Northern Indiana.  This time, it was what I had thought a small-town parade would be like–the high school marching band, the local beauty queens riding on floats, the fraternal organizations dressed in their regalia, and, of course, the mayor and city council members riding in convertibles.

And now, The Mister and I live in an historic neighborhood that has its own kiddie parade every July 4th.  The kids decorate their bicycles and parents pull the toddlers in spiffed up wagons.  After the parade, everyone gets together for a good old-fashioned picnic of hotdogs and hamburgers.  As the sun begins to set, families begin the journey to one of the local fireworks venues and the rest of us go inside to watch A Capitol 4th on PBS.

I found this home movie on Archive.org.  The first part of the video shows the All States Picnic Parade in Ontario, California, from July 4, 1955.  In addition to the beauty queens and local big-wigs, it also shows the Spanish-influenced equestrian groups that were so popular in the mid-century.  The original film didn’t have any sound so I added some patriotic music that I found at the Library of Congress.

Click here if the player does not work for you

Like any family, the United States is not perfect.  We have some serious problems that we need to come together for to find win-win solutions.  But, every time I hear our national anthem, I can’t help but get choked up.  Happy birthday, America.  And may we have many, many more.

What are your memories of your Independence Day parades? 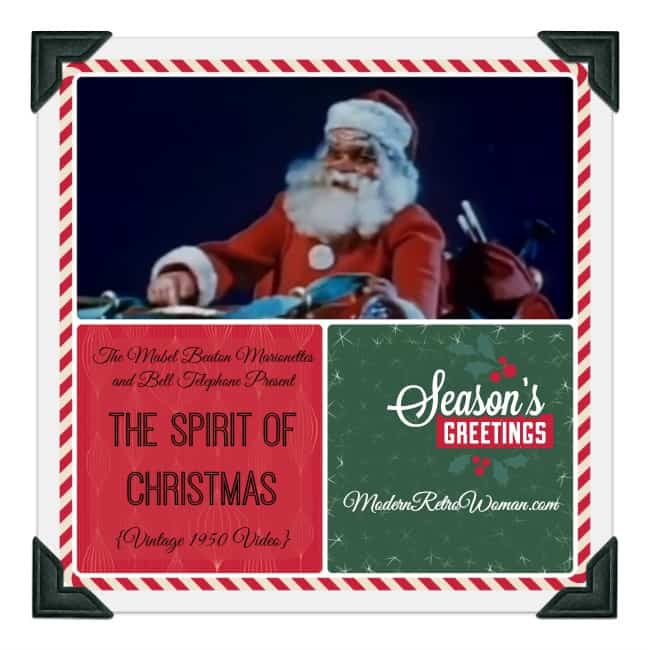 It was late November, 1988.  The Mister and I had moved to a foreign land called New Jersey just a few weeks before so that he could work at an art foundry.  My teaching license hadn’t yet been transferred from California.  I was lonely and terribly homesick.  I played Far From The Home I Love on the record player over and over again while The Mister was at work.  My glimmer of hope was that I would be going back to California in mid-December to be a bridesmaid in a friend’s wedding and would be able to have an early Christmas with my family.

As I made my dress for Lisa’s wedding, I watched the PBS station out of Philadelphia, WHYY-TV12.  They were in the middle of a pledge drive and happened to show a 1950 movie sponsored by Bell Telephone starring the Mabel Beaton Marionettes.  The Spirit of Christmas was such a hit for them that, at one point, they played it over and over again as the pledges came pouring in.

And as I sat there sewing, bawling my eyes out, and watching this quirky movie, The Spirit of Christmas began to grow on me.  I was delighted to stumble across it the other day on YouTube so that I can share it with you because it has such symbolic meaning for me:

Comfort for even the deepest depths of heartaches can show up in very unexpected ways.

The Spirit of Christmas is quirky* and definitely a product of the time from when it was made.  But it is a timeless story that I hope you will enjoy, too.

Click here if the video doesn’t work for you.

*There are versions of this video on YouTube that edited out the opening Bell Telephone sequence.  I’m sharing the full version since I think the opening sequence adds to its charm. 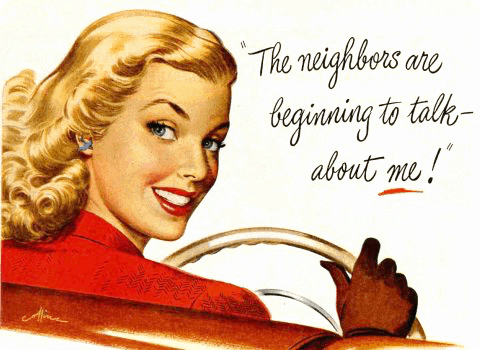